Researchers at the University of Illinois at Urbana-Champaign have developed a new lithium-ion battery technology that is 2,000 times more powerful than comparable batteries. According to the researchers, this is not simply an evolutionary step in battery tech, “It’s a new enabling technology… it breaks the normal paradigms of energy sources. It’s allowing us to do different, new things.”

Currently, energy storage is all about trade-offs. You can have lots of power (watts), or lots of energy (watt-hours), but you can’t generally have both. Supercapacitors can release a massive amount of power, but only for a few seconds; fuel cells can store a vast amount of energy, but are limited in their peak power output. This a problem because most modern applications of bleeding-edge tech — smartphones, wearable computers, electric vehicles — require large amounts of power and energy. Lithium-ion batteries are currently the best solution for high-power-and-energy applications, but even the best li-ion battery designs demand that industrial designers and electronic engineers make serious trade-offs when creating a new device.

Which brings us neatly onto the University of Illinois’ battery, which has a higher power density than a supercapacitor, and yet comparable energy density to current nickel-zinc and lithium-ion batteries. According to the university’s press release, this new battery could allow for wireless devices to transmit their signals 30 times farther — or, perhaps more usefully, be equipped with a battery that’s 30 times smaller. If that wasn’t enough, this new battery is rechargeable – and can be charged 1,000 times faster than conventional li-ion batteries. In short, this is a dream battery. (See: DoE calls for a chemical battery with 5x capacity, within 5 years – can it be done?) 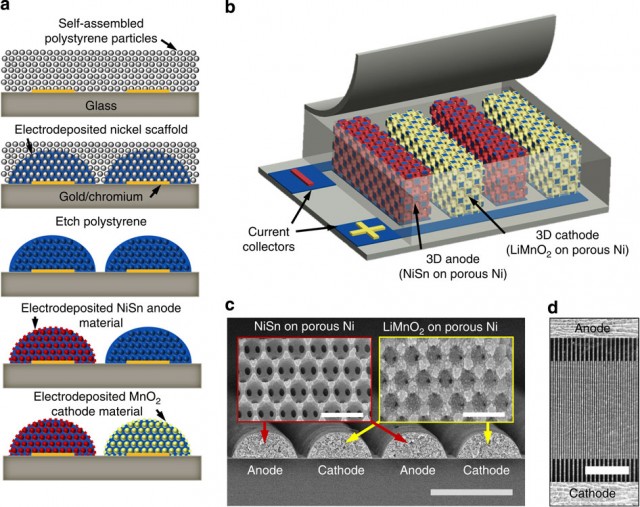 These huge advances stem from a brand new cathode and anode structure, pioneered by the University of Illinois researchers. In essence, a standard li-ion battery normally has a solid, two-dimensional anode made of graphite and a cathode made of a lithium salt. The new Illinois battery, on the other hand, has a porous, three-dimensional anode and cathode. To create this new electrode structure, the researchers build up a structure of polystyrene (Styrofoam) on a glass substrate, electrodeposit nickel onto the polystyrene, and then electrodeposit nickel-tin onto the anode and manganese dioxide onto the cathode. The diagram above does a good job of explaining the process.

The end result is that these porous electrodes have a massive surface area, allowing for more chemical reactions to take place in a given space, ultimately providing a massive boost to discharge speed (power output) and charging. So far, the researchers have used this tech to create a button-sized microbattery, and you can see in the graph below how well their battery compares to a conventional Sony CR1620 button cell. The energy density is slightly lower, but the power density is 2,000 times greater. On the opposite end of the bleeding-edge spectrum — increased energy density, but lower power density — then IBM’s lithium-air battery currently leads the pack.

Energy density vs. power density for a variety of battery technologies, including University of Illinois’ new microstructured anode/cathode li-ion battery

In real-world use, this tech will probably be used to equip consumer devices with batteries that are much smaller and lighter — imagine a smartphone with a battery the thickness of a credit card, which can be recharged in a few seconds. There will also be plenty of applications outside the consumer space, in high-powered settings such as lasers and medical devices, and other areas that normally use supercapacitors, such as Formula 1 cars and fast-recharge power tools. For this to occur, though, the University of Illinois will first have to prove that their technology scales to larger battery sizes, and that the production process isn’t prohibitively expensive for commercial production. Here’s hoping.