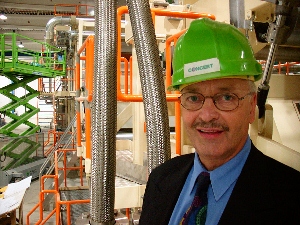 As the President and CEO of the company, Mr. Peter is responsible for overall operations of the Company. Since 1982, Mr. Peter has been a founder and principal in resource exploration companies which have been listed on the Vancouver, Toronto (TSXv, TSE & TSE300 Index), Montreal, and London Stock Exchanges.

His experience includes all aspects of resource exploration and development, financing and management of projects and personnel. Mr. Peter received the 2000 Ernst & Young “Entrepreneur of the Year” Pacific regional award for manufacturing for his achievements with Concert Industries Ltd, BC, Concert Fabrication Ltd, PQ and Concert GmbH, Germany.

Andrew H. von Kursell, P.Eng – Director
Mr. von Kursell is a registered engineer in British Columbia, Ontario, the Yukon Territory and Nova Scotia. He is an experienced senior executive in the national and international mining industry, having held senior positions for Cominco and Cyprus Anvil Mining Corp. He is presently a Director.

Mr. Hendrickson was Geophysicist of Ivanhoe Mines. He was responsible for Ivanhoe’s world-wide geophysical exploration programs, Managing Director of Delta Geoscience Ltd. from April 1986 to January 2005, Director and Co-Founder of Praxis Goldfields Inc (2000-2007) and Director of Goviex Gold Inc and Goviex Uranium Inc.

Mr. Peter-Kaiser possesses a Bachelor of Science degree in Business Administration and has over 10 years of experience working in the Film Industry. He has extensive experience in film production, finance, development, marketing, distribution, brands, and new media. He has a proven record meeting goals, budgets and delivering a consistent job performance.

Mr. Milo Filgas is a Marine Engineer and has over 55 years of experience in the mining and milling industries in Canada. He is the owner and President of R. F. Fry & Associates (Pacific) Ltd, a well-known mining and milling contractor in Canada. Mr. Filgas has extensive experience in the Canadian mining industry, mine development as well as operations and has a thorough knowledge of Canadian mining and Labour Laws. Mr. Filgas has served as director of public companies in Canada.